From chandelier to flush mount, chrome to bronze, the Sputnik is available in an array of finishes, shapes, and sizes so you can enhance just about any room at an affordable price point. Not only is the Sputnik light offered in both a chandelier and flush mount silhouette, but each of these styles offers various numbers of arms - from twelve to twenty - to ensure that the fixture meets the needs of your space. 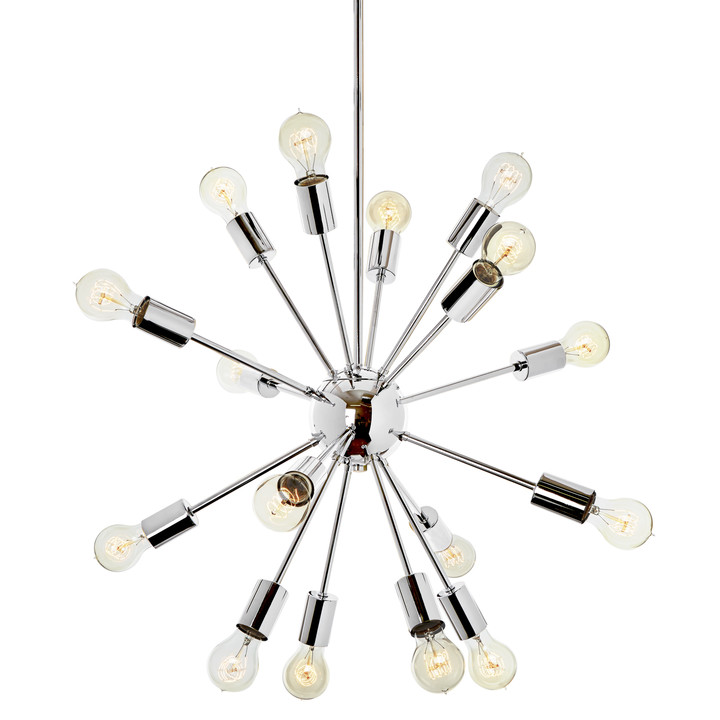 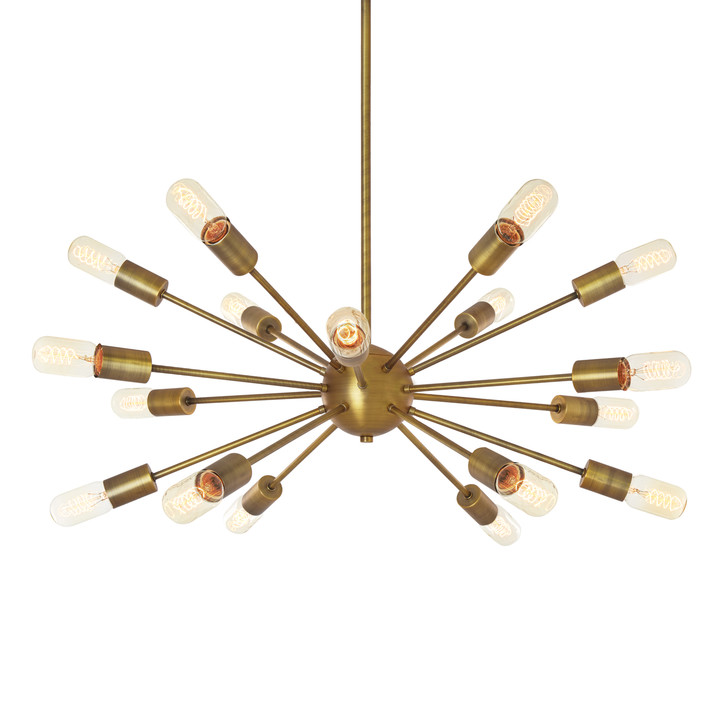 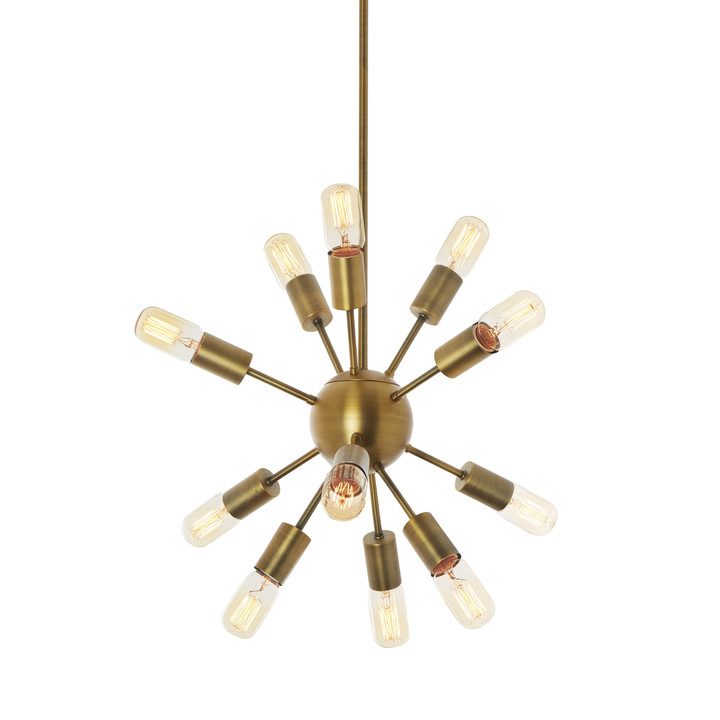 Selecting the right finish can help you achieve your desired decorative effect. In chrome, the Sputnik chandelier looks the most like its namesake - sleek and industrial and ready for space. The Sputnik chandelier in aged brass is a contemporary spin on the original, offering a satiny appearance in a luxe hue. Lastly, the pewter finish is a versatile, timeless option, as it has both warm and cool tones.

The exposed bulbs on the Sputnik Chandelier offer another opportunity for personalization. The fixture is often pictured with Edison bulbs, as they complement the piece’s vintage origin. An of-the-moment option is to outfit the Sputnik with frosted chandelier bulbs for a more contemporary feel.

While the Sputnik chandelier is the most frequently seen, Sputnik flush mounts are a great alternative for spaces with lower ceilings. In rooms where a large chandelier is not an option, the flush mount has a smaller profile, giving you the impact of the Sputnik style without the size limitation. 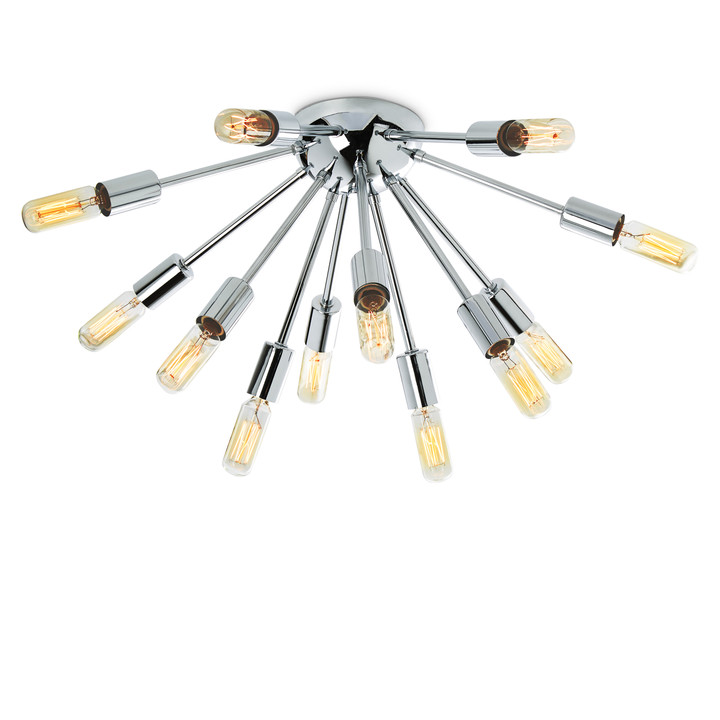 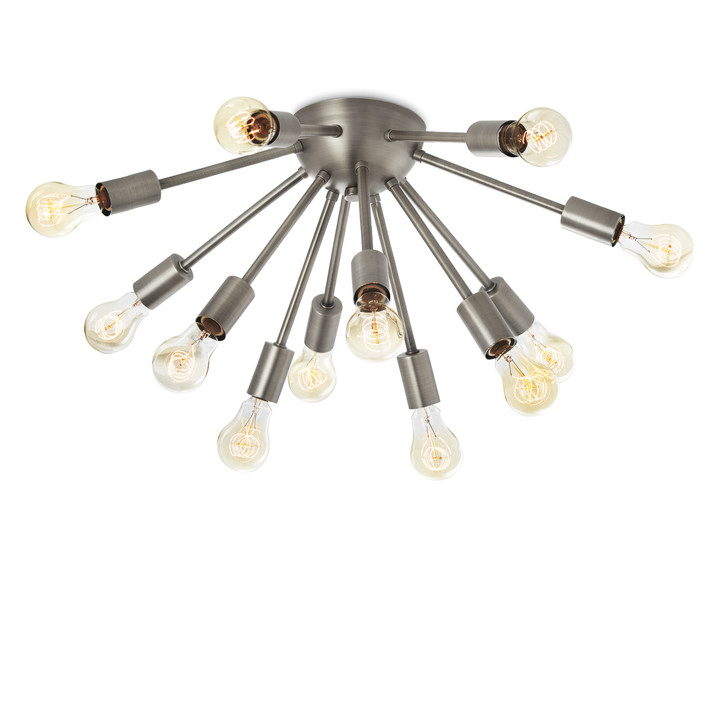 History of the Sputnik Chandelier

Sputnik chandeliers have been capturing the imagination of the public since the late 1950s. The design of the original Sputnik has been attributed to multiple designers as it’s been replicated many times in the last 70 years, but the originator is often seen as the Modernist Italian designer, Gino Sarfatti.

Gino Sarfatti’s career, much like the Sputnik Chandelier, had unorthodox origins. He did not enter the industry as an architect or designer, rather his background was aeronautical engineering. Due to trade restrictions in Italy at the time, his family became impoverished, forcing him to leave school and consider ways to bring home immediate income.

After a friend asked him to convert an old floral vase into a light fixture, he dedicated his time to developing lighting. Utilizing his engineering background and a practical approach to problem solving, Sarfatti designed what he deemed as “rational lights” - simple, elegant, and efficient. Over time he explored the directionality of light and experimented with beaming pendants both upwards and downwards. One could say, the Sputnik Chandelier is the perfect embodiment of all of those ideals.

The Sputnik light was not designed on a whim - it was heavily influenced by people’s fascination with all things space during this time period (1940-1960.)  After World War II and the detonation of the two atomic bombs, the general public developed a curiosity about scientific and technological advances. This curiosity was intensified after the Soviet Union launched the first satellite, the Sputnik, in 1957.

Sarfatti, practical as ever and now a world-renowned designer in the Italian mid-century movement, harnessed this fascination and blended it with his rational approach to design to create the Sputnik Chandelier as we know it. With its radiating, metallic silhouette and Russian satellite allusion, Sarfatti transformed the traditional chandelier into a whimsical statement piece that quickly became an iconic design recognized around the world.

Meet the minds behind some of the world's most popular lights. Poul Henningsen, Achille Castiglioni, Gino Sarfatti, George Nelson, and George Cardwardine.

Lofts and studios are loved for their big empty floor plans and cavernous ceilings. This leaves dwellers excited, but often confused, about how to carve out and illuminate space. Here are some tips to get you started.